The industry racked up gains worth $178 billion after fees, according to estimates by LCH Investments, a fund of hedge funds. Hohn’s TCI Fund Management made $8.4 billion for clients, while Mandel’s Lone Pine Capital enriched investors by $7.3 billion.

The annual survey focuses on managers with the most overall profits since inception, a ranking where the largest and oldest hedge funds tend to do best. The top 20 managers, who oversee less than a fifth of the industry’s assets, generated a third of the gains for investors last year.

“Several managers in the top 20 recorded very strong gains in 2019, especially those that were positioned net long equities,” Rick Sopher, chairman of LCH, said in a statement.

Hedge funds have been pitted against the longest-running bull market in stocks, leading them to fall behind cheaper index funds tracking market returns year after year. While those betting on rising and falling stocks gained 13.7% last year, they fell way behind the 31.5% surge in the S&P 500 index.

TCI, which runs a long-biased activist fund and gained 41% in 2019, its best annual performance in six years, returned to the top 20 ranking after a one-year absence. John Armitage’s Egerton Capital also rejoined the club.

Ray Dalio’s Bridgewater, whose main fund last year suffered its first loss since 2000, topped LCH’s ranking for the most profits since inception. Since the date of launching, all hedge funds have made a total $1.28 trillion for their clients. About 44% of the gains, or $558 billion, has been generated by the top 20.

LCH also estimated that the top managers have made a combined $62.5 billion in donations or commitments to philanthropy and charitable causes. That “represents approximately 45% of the performance fees their firms have earned since inception,” Sopher said. 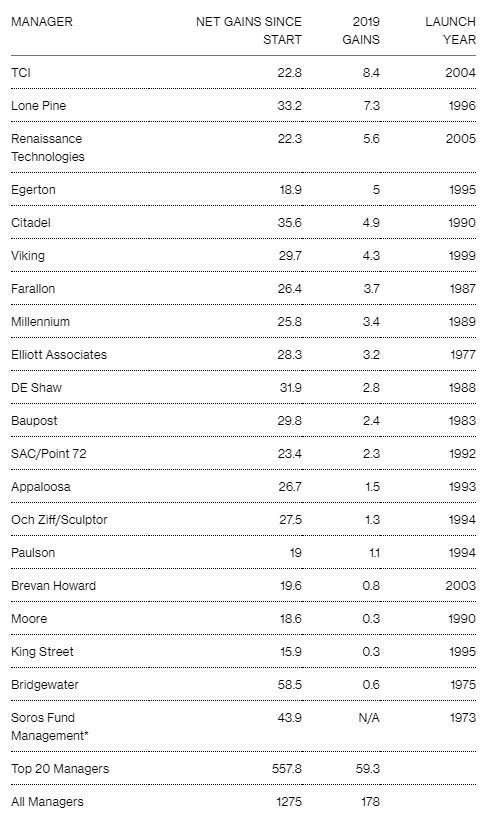 AlternativeSoft is an award-winning quantitative analytics software specialising in asset selection, portfolio construction and customised reporting. To find out more or register for a free demo, get in touch with our team.